Alright, here it is. A best books list. I was going to do a traditional best books list, including all the books, but I haven’t even finished A Little Life. I got to the part after all is revealed where a weak Jude must be scooped out of his chair by Willem after a wonderful dinner with friends. Jude peeks back to the hearty laughter and gives a pathetic little wave. And I was just like, “I’m going to put this aside for a bit.” I set it aside, and didn’t pick it back up.

Clearly there’s a type of book I love most. If you’re a reader of the blog, you’ve caught on to that. A guy at work exclaimed the other day, “You have a fascination with criminals!” And maybe I do. I like my books a little salty, a little lurid, enveloped in a whole lot of darkness with a few well-deserved twists. That means that most of my faves fall somewhere between literary fiction and thriller, walking a tightrope of noir and psychological horror. Some were released in other countries before this year, but it’s a blog, and I make up my own rules.

Cuddle up with a cat and a comforter, cozy up with some cocoa and your Kindle. You’ve got a lot of books to get through. Happy reading!

Malerman’s Ghastle and Yule is the sort of calorie-free Halloween treat you can’t miss. It’s less than a dollar, so the price is right. 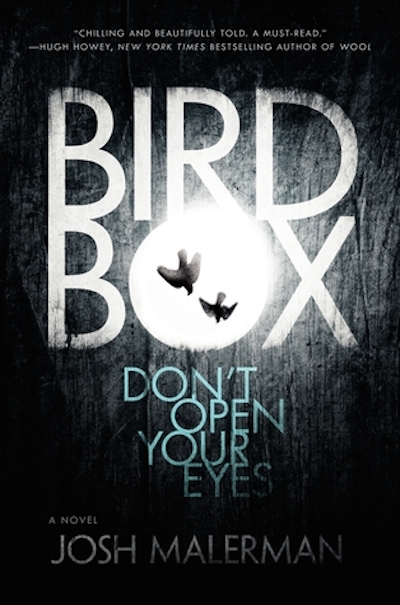 In our entertainment-laden society, it is hard to create something scary. We live in the time of the seven (!) Saw movies, which coined the phrase “torture porn.” We’ve seen the evolution of Stephen King both in his novels and the screen, topiary bushes in the shapes of animals rushing towards us each time we leave them unwatched, clowns waiting to snatch us and carry us down gutters into their lairs, bubbles thrust down upon towns from the sky. We’ve known sweet women possessed and more stern but kind exorcists than we can count, guys keeping the faith even when their church has cast them out for their beliefs. And we’ve known haunted houses. Oh, the haunted houses we’ve known.

But Josh Malerman brings us, with Bird Box, the sort of hysterical fear Edgar Allen Poe builds to an almost unbearable height in his short story The Tell-Tale Heart. The air in this book is so thick with anxiety you can cut it with a knife, you can dive into it like it’s a pool. You could almost see the anxiety, if you could just open your eyes.

Because you must keep them closed: in Bird Box, people catch a glimpse of something which drives them mad. They start killing each other, killing themselves. Those unaffected start covering their windows, not leaving their homes. The unaffected choose to act as if they were blind, using brooms or canes to find their way when they must venture out. As time progresses, only those who blindfold themselves outside, to prevent seeing whatever sort of awful thing outside is poisoning humanity, survive.

This is a book of people stumbling in the dark, feeling for things they aren’t sure are there. This is a book in which the moment you decide to take off your blindfold and open your eyes could be your last sane moment on earth. This is a book that heavily relies on mood, one voice calling out slowly to another voice. “Are you still out there…?” “Yes, I’m still here.” “…Are you okay?”

In one of its most memorably terrifying scenes, getting water from a well (what should be a short distance from the safety of home) turns into a sensory delirium, all panic and doubt, as footsteps are heard or imagined, objects felt or brushed over, queries distorted by distance and fear. A short walk turns into an agonizing plunge through the unknown. Bird Box is very scary, indeed.

As those countless Saw films illustrate, brutality is a simple formula, blunt and easy to replicate. Much more difficult to execute is suspense. Suspense happens in all the moments we’ve trained ourselves to ignore, as we rush from one action film to the next, as we save reading only for our daily commutes. Malerman creates, with Bird Box, a world in which each statement, each movement or pause, is dripping with a delicious suspense that demands your full attention. Bird Box deserves a dark house and a warm cup of tea, it deserves your full attention as you pause and think, with each character: “Is this the moment to open your eyes, despite all that may be out there, waiting?”

I just finished Stephen King’s The Shining, in anticipation of reading the recently released Doctor Sleep.  Doctor Sleep, a sequel to The Shining, features a grown-up but still traumatized Danny Torrance.  The Shining is one of the most horrifying books I’ve ever read, and it is amazing how King manages to heighten the fear around harmless things like topiary art to an intense level.

I love to read King’s comments on his work, as he always has great perspective. Here are some great thoughts written by the author in an introduction to a new edition of The Shining, written in 2001:

A killer motivated to his crimes by supernatural forces was, it seemed to me, almost comforting once you got below the surface thrills provided by any halfway competent ghost story.  A killer that might be doing it because of childhood trauma as well as these ghostly forces…ah, that seemed genuinely disturbing.
…
The decision I made to try and make Jack’s father a real person, one who was loved as well as hated by his flawed son, took me a long way down the road to my current beliefs concerning what is so blithely dismissed as “the horror novel.”  I believe these stories exist because we sometimes need to create unreal monsters and bogies to stand in for all the things we fear in our real lives…
…
That truth is that monsters are real, and ghosts are real, too.  They live inside us, and sometimes they win.

The Shining by Stephen King on Amazon