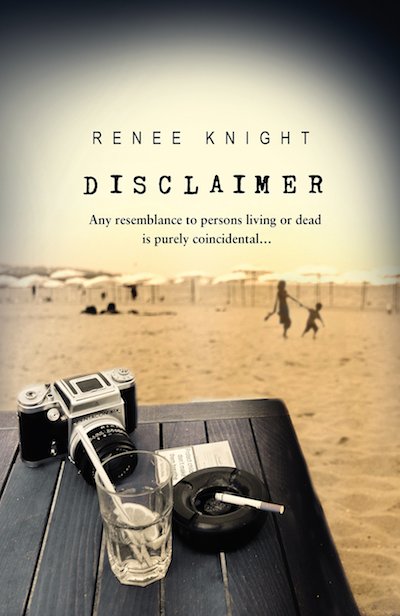 Imagine picking up a book, and being drawn into its story. But suddenly the action swerves, the story turns much darker, and you find yourself appear in the text, a character recognizable except for a name change. The book begins to reveal a secret–a secret you’ve kept to yourself for years, that simply no one could know. And yet, there it is, drawn out on the page, this horrible action, stepping out of the past and into this plot.

When you flip to the disclaimer at the beginning of the book, that page with copyright information which assures the novel’s status as a work of fiction and says, “Any resemblance to any persons living or dead…,” the entire disclaimer is crossed through with a red line. Someone, you realize, is playing with you. Someone, you realize, has written this book just for you.

This is what happens to Catherine Ravenscroft in Renee Knight’s novel Disclaimer. Catherine, successful documentary film maker, transforms from a successful businesswoman into a bundle of nerves as she tries to trace The Perfect Stranger, the novel infiltrating her life and her history, down to its source.

In alternating chapters, the author of the novel is revealed, but this is a story of appearances and expectations, two of the most difficult things to interpret. By the end of the book we’ve learned many times over, thanks to Knight’s nuanced characters, just how much looks can deceive, and just how far the stories we tell ourselves can be from the truth.

[…] Disclaimer by Renee Knight  I absolutely loved the premise of this one so much I had to go out and get a copy. A woman picks up a book and begins to read the story of her life. She notices the disclaimer in the front, that one that ensures the story isn’t based on true events, is crossed out. Who wrote the book? How did it get to her? My review. […]

[…] blackouts of The Girl on the Train, a diary-in-reverse in the miraculously appearing novel of Disclaimer, and amnesia post-accident of In a Dark, Dark Wood. But The Widow reminds us that in our post-Gone […]