Review – Orange Is the New Black by Piper Kerman

Yes, Orange Is the New Black was a memoir before it was a hit series on Netflix. For those of you resisting the future of television: What happens when a nice girl gets locked-up? Orange Is the New Black: My Year In a Women’s Prison by Piper Kerman tells us, as she recounts her journey through the American prison system.

The Smith-educated, upper-middle class, white, blonde Kerman had a happy life in New York, working as a freelance producer and living with her magazine editor boyfriend, when two Federal Customs Agents showed up at her door and changed her life forever.

Her past, long-forgotten, caught up with her in the form of a federal indictment. As she explains in the memoir, the mild-mannered Kerman sought adventure post-college, eventually falling in with a heroin-smuggling, bulldog-faced, world-traveling lesbian from the Midwest (this is why memoir works–you seriously can’t make this stuff up). Although Kerman and her smuggling girlfriend traveled to exotic locales and had some really good times, they also casually laundered cash like no big deal and eventually, Kerman smuggled cash herself. Thus, customs agents at the door, and federal prison time. And then, a memoir and streaming television series. 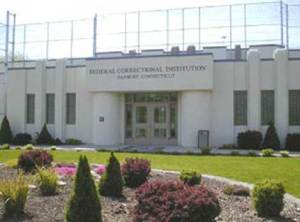 FCI Danbury, where Kerman does her time.

Despite its flippant title, Kerman tells us in her memoir that orange is decisively not the new black, for herself or anyone else who gets stuck in the American justice system. The book comments as much on the prison system as it does on Kerman’s struggles within that system. Kerman seems aware, as a writer, of the risks she takes as a wealthy white women writing about jail time: too much complaining about the facilities could come off as a woman spoiled and not willing to do the time for her crime; too much exposé on her bunkmates could read as exploitative of women not wanting or able, for their own reasons, to tell their stories at a public level. Kerman seems to walk a fine line both in prison and in her writing, acknowledging her place of privilege without discounting her own experience.

Orange Is the New Black is carried by Kerman’s charm, and the memoir owes much of its fun vibe to her easy banter with fellow inmates, combined with self-deprecating stories revealing both humor, insecurities, and a hugely inept prison system. In prison, she seems to get along with most and form touching bonds with many, and she identifies with the other prisoners despite prison guard’s efforts to separate her from her fellows.

“So, is it like the show?” This is what people ask when I tell them I’m reading Orange Is the New Black, if they aren’t surprised to learn the hit Netflix series is based on an actual memoir.  The series stars the saucy and endlessly watchable Taylor Schilling, star of cancelled NBC medical drama Mercy, as Piper Chapman, whose character is based on the real Piper Kerman.

The memoir and the TV show have similarities, but they aren’t so similar that reading the memoir after watching the show will create a sort of discordant echo that creates confusion. Remember, though, that the memoir is exclusively Kerman’s story. It contains not only humorous snippets from her time inside, but also facts and experiences about our prison system any reader can easily get upset about. After reading Orange Is the New Black, I understand how Kerman is now active in organizations for reform in the prison system. I see how she must fight against what she experienced and saw others experience.

The Netflix series, while staying true to Kerman’s basic storyline, belongs to the women in prison other than the Kerman/Chapman character. The show’s creator, Jenji Kohan, called Kerman’s character her “trojan horse” in an NPR interview:

You’re not going to go into a network and sell a show on really fascinating tales of black women, and Latina women, and old women and criminals. But if you take this white girl, this sort of fish out of water, and you follow her in, you can then expand your world and tell all of those other stories. But it’s a hard sell to just go in and try to sell those stories initially. The girl next door, the cool blonde, is a very easy access point, and it’s relatable for a lot of audiences and a lot of networks looking for a certain demographic. It’s useful.

So read the book understanding Kerman isn’t able to give background or history on her fellow inmates, as that isn’t her story to tell and that was the choice of the Netflix show’s creator, Kohan.

Some surprising elements of the show, which actually happened (spoiler alerts!): Kerman does end up in the same federal prison as her ex-girlfriend, the heroin-smuggling lady who partially was responsible for Kerman getting into the whole mess. They do work things out, but they don’t sleep together. Kerman does offend Pop, the actual strong-willed woman who runs the kitchen by insulting her cooking.  Kerman does end up working in electrical where she trains herself by reading a huge manual, and yes, there is a pacifist nun in federal prison along with Kerman.

Orange Is the New Black on Amazon.com – Kindle edition is $5.99 right now!/Indiebound.org

[…] reviewing Piper Kerman’s memoir, I’ve gotten questions about this aspect of the memoir that inspired the Netflix hit series […]