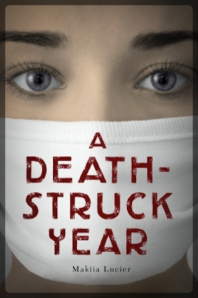 In a sea of uninspired Young Adult books, each struggling to be the next Hunger Games mega-hit in a battle so fierce it might as well be taking place in Panem, reading A Death-Struck Year by Makiia Lucier was, counterintuitively, like an honest and gripping breath of fresh air.

A Death-Struck Year shouldn’t feel so fresh because it takes place in Portland, Oregon, in 1918. For those of you who aren’t familiar with recent history, the Spanish flu (now known to be a variant of the H1N1 virus–ready to get your flu shot yet?) spread like crazy between 1918 and 1920, and killed 3-5% of the world’s population, ultimately killing more people than World War I.

A Death-Struck Year’s unsuspecting heroine Cleo, 17 years old and pensive about her future, watches in alarm as the pandemic closes in around her. First, the reports of sickness are distant, only in papers and heard as vague rumors; then Cleo notices restrictions on travel in town, and masks on faces of travelers; finally, she finds herself in a terrifying situation, as the city shuts down completely and people die in the streets or unnoticed in their homes.

The virus creeps into the community quick, and it is easy to feel Cleo’s confusion. Early on, Cleo’s school keeps a watchful eye on its students’ sneezes, but then it makes the decision to shut its doors completely. With family out of town, Cleo finds herself home alone in the middle of the flu pandemic. When the Red Cross calls for able women to assist the sick, Cleo shyly responds to the request, finding a bedraggled and understaffed Red Cross staff desperate for help. Before she fully comprehends it, a testament to how quickly pandemics seemingly spread, Cleo is driving her brother’s car around town, knocking on doors, educating her neighbors on the virus, calling help for the ill, and, sadly, discovering the dead.

Cleo finds comfort and friendship among the overworked staff at the Red Cross emergency triage center set up in Portland’s auditorium, where nurses, army doctors, and community volunteers group to battle the illness. Together they struggle through the pandemic, relishing small triumphs and mourning the much greater losses they suffer. A wounded army doctor catches Cleo’s eye, and a romance develops.

It seems like young readers are hungry for smarter material, and I think A Death-Struck Year is on the right track. Teens know there is more to a crush than a fast heart beat; there is more to suspense than a fight scene. Lucier has managed to create a gripping story that resonates as honest. Cleo must find in herself unimaginable bravery, and she is a strong heroine–but rather than drop Cleo’s character development as the action develops, Lucier is able to build her into a real young woman that could be any reader of the book growing up in a different time, rather than a caricature of what a girl should be like or think like. Lucier has studied up and written with a painstaking attention to historical accuracy, and the attention to detail certainly shows in the book.

Although at a higher reading level (age range is 12 and up), A Death-Struck Year reminded me of the American Girl books I used to read when I was a younger child. They would recount the struggle of a young girl in a pivotal time in history. I don’t read a ton of historical fiction (although I am currently reading The Invention of Wings by Sue Monk Kidd) but I understand how following a young woman through a more turbulent time in history could appeal to a Young Adult reader in the same way a dystopian novel would, but with a more grounded twist. Lucier reminds us of tragedy which took place in years not too far past, and the ability of history to tell us its thrills and heartbreaks.

A Death-Struck Year will be released on March 4th, 2014.  Author Makiia Lucier will be doing an Ask Me Anything in /r/books on Reddit at 12 pm ET on March 4th. Essentially, people ask Lucier anything and she answers.

For those who don’t know about Ask Me Anything (AMA) on Reddit, there is a great Atlantic article which explains the phenomena and speculates on why it works, and I think its title sums up AMA’s evolution: “AMA: How a Weird Internet Thing Became a Mainstream Delight.”