Tom Cooper Brings The Bayou To Life In ‘The Marauders’ 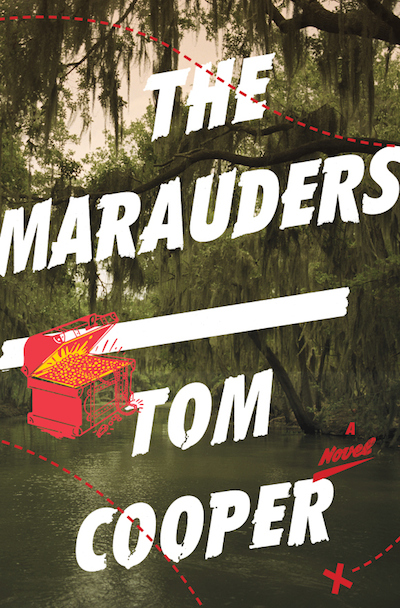 In 2010, the BP oil spill brings new disaster to the small bayou town of Jeanette, Louisiana, as it still reels from Hurricane Katrina, five years earlier. Tom Cooper’s The Marauders is a cataclysmic caper tale of this time, with the capers here being those of simple Southern men trying to survive when smarter folks have fled their seemingly cursed region.

In Jeanette, men get addicted to the hard stuff early, backbreaking work equating with muscles that call out for whiskey, and later oxycontin. Shrimpers find three-eyed catches in their nets, or no shrimp at all, and wonder if they should take the settlement money BP is offering, and give up trawling for good like so many of their friends and neighbors. Fancy New York restaurants are advertising shrimp from China–it is, perhaps, the worst of times to be a small town shrimper in the Gulf Coast.

The story rounds through a group of out-of-luck men, each character brilliant in their peculiarities, their regional drawls, their singular and often circular big dreams. Circuits cross between plot lines, friends are made, identities mistaken, lives lost.

Gus Lindquist is a one-armed shrimper, he lost his arm stoned in a boating accident and now he’s misplaced his fancy, fake prosthetic arm as well. But never one to be discouraged, Lindquist pops pills from a pez dispenser and tells knock knock jokes almost continuously, and at inopportune moments. He tirelessly scavenges the bayou for pirate treasure in his spare time, metal detector in his one good arm, dreaming of the secret stash he’ll someday find and the riches that will bring back the wife who has left him and the daughter who doesn’t visit.

Wes lost his mom in the hurricane and never quite forgave his father for insisting that the family stay put in the storm. He goes out with his dad on the shrimping boat despite shrinking catches and shrinking pay.

Cosgrove and Hanson are easygoing misfits. They meet on a community service detail, fixing up an old woman’s house so the city can seize it as soon as she dies. They reunite at a sweet gig cleaning birds drenched in oil for $15.

These are all lovable, and deeply flawed, characters, which makes their forward motion towards disaster all the more painful to read. As someone who has never visited this area of the country, Cooper brought the area to life with lush, striking descriptions of a landscape hostile enough that only the craziest of men try to access its bounties.

I often get so caught up in my mystery novel obsessions I forget what a pleasure humor is in novels. This isn’t a light book, but it is incredibly funny. The Marauders is a tragicomedy that managed to dismay me and still end on a triumphant, movingly positive note. And especially for a first novel, this is a big reach towards all the stars in that inky bayou sky. Cooper nailed it, and he’s definitely a name to watch in the future.