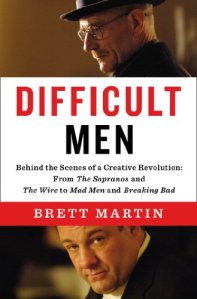 Who knew the land of quality television could be so intriguing?  I’ve dabbled with books discussing the evolution of TV into a medium capable of showcasing intelligent and quality work.  Everything Bad Is Good For You by Steven Johnson discussed the development of the multi-story arc, describing the complicated story lines once reserved for soap operas which began to drift into primetime dramas with Hill Street Blues.

Difficult Men: Behind the Scenes of a Creative Revolution: From The Sopranos and The Wire to Mad Men and Breaking Bad by Brett Martin (I’m not kidding, there are really two subtitles there) takes this concept further, covering what he calls TV’s “third golden age”:  the era that began with The Sopranos, continued with The Wire and Mad Men, and finally crescendoed with Breaking Bad.  The title stems from not only protagonists of the third golden age, like Tony Soprano and Walter White;  but also from the intense and exacting personalities behind these characters, like David Chase, David Simon, and David Milch (yes, the number of Davids discussed gets confusing).

I love stories of the persistence required to reach success, as it reminds me that great things don’t just seem great to everyone and blossom easily, and a lot of the tales behind the most popular TV shows today are full of rejection and stumbling blocks.  Breaking Bad was passed over by several networks and almost didn’t get aired after the pilot was filmed, but AMC gave the show a chance after everyone else said no.  Matthew Weiner stewed over the pilot of Mad Men for eight years, at times literally carrying it around with him wherever he went.

I was mainly drawn to this book because of The Wire.  I thought it was so audacious and smart, and it illustrated how systems can just not work in a way only illustrated by books and movies in the past.  The poignance of the one-liners, and the level to which the writers let things play out (legalizing drugs?) seemed more akin to the complicated plot development of novel than the forgettable actions taken on traditional TV shows.  The Wire’s creator David Simon has had an incredible life: he seemingly forced his way into journalism first in college and then at the Baltimore Sun, and then embedded with Baltimore police for a year and wrote books about his experience in the city.  The first book, Homicide: A Year on the Killing Streets inspired the boundary-pushing TV show Homicide: Life on the Street; the second book, The Corner: A Year in the Life of an Inner-City Neighborhood inspired The Wire.  I hadn’t realized the level of research Simon had done before creating The Wire, and now I realize it shows in the work.

Difficult Men manages to examine the success of these shows from many levels.  Martin discusses the history of the cable business with the same ease as he analyzes our fascination with Tony Soprano.  This book shows that at the core of most TV, there are writers yearning to create stories of a certain quality.  These guys are studying Chekhov and hoping to create art in the truest sense of the word.  As movies keep devolving into blockbuster action flicks and series based on teen novels, it is easy to see why TV has been forced to step up to the plate as an outlet for intelligent and complicated work.  This was a timely read for me, as Breaking Bad was ending shortly before I read this and it seemed like everyone was talking about the show everywhere I went, to a level I’d never experienced before.  TV seems to be the most evolving genre of our time, with companies like Netflix and Amazon now financing their own shows.  It will be interesting to see what sort of masterpiece the brilliant and difficult writers of the TV world come up with next.

Difficult Men: Behind the Scenes of a Creative Revolution: From The Sopranos and The Wire to Mad Men and Breaking Bad by Bret Martin on Amazon.com