Recap of Hieroglyph Q&A with Neal Stephenson and friends 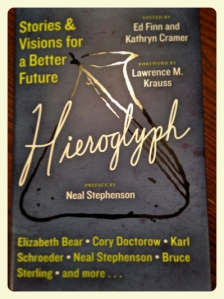 Hieroglyph: Stories & Visions for a Better Future, released this week, is an anthology which encouraged authors “to contribute works of ‘techno-optimism’ that challenge us to dream and do Big Stuff.”

The entire idea came about when Neal Stephenson gave a talk at the Future Tense conference in early 2011, where he “lamented the decline of the manned space program, then pivoted to energy, indicating the real issue isn’t about rockets. It’s our far broader inability as a society to execute on the big stuff.”

Michael Crow, Arizona State University’s president, heard this lament and suggested to Stephenson that perhaps the problem began with Stephenson himself, and other sci-fi writers like him who weren’t thinking big enough in their ideas. Thus, Ed Finn and his Center for Science and Imagination at ASU stepped in, connecting some serious scientists with those great masters of imagination, science fiction authors.

The culmination of these connections are boggling, vivid, and seriously delightful: a structurally sound twenty-kilometer-high steel tower (that would be really high, for those lacking perspective); cities that function like ecosystems, either through technology built to act as biology or through biological infrastructures; a world where machines have been entirely replaced with living matter; or a psychedelic revolution where we’re tripping out on quantum mechanics rather than any sort of drug.

I had the opportunity to attend a Hieroglyph release event with many of the authors, most notably Neal Stephenson, and both of the editors, at Kepler’s Books in Menlo Park on September 10th. No better place to talk about science and imagination than in the heart of so much innovation, Silicon Valley, right?

After a quick introduction by Finn, who also edited the book, the first panel featured Stephenson and Keith Hjelmstad. Hjelmstad is a professor of structural engineering at ASU who worked with Stephenson on his idea for the book, the Tall Tower. The idea originally came from an old paper by Jeff Landis, Stephenson said, but he realized quite quickly he needed professional help. He was doing fine until he took wind into account. “99.9% of the problem is wind,” he said, with a very, very high building.

Hjelmstad said the “desire to make it real” drew him to the project–he even had a graduate student e-mail him about a design detail that morning. As the world of engineering is often bogged down with many codes and lawyers, which can kill creativity and innovation, this project offered something different.

Stephenson and Hjelmstad eventually came up with something that “looks like a tower, but flies like a kite,” as it was necessary to harness the wind for stability. This was sort of a new way of looking at a building–an organic idea.

There was a brief Q&A after the Tall Tower talk, in which Stephenson shrugged off a question about Google Glass and Snow Crash very modestly, saying the book’s concepts were around before he wrote about them. He said that he doesn’t think science fiction necessarily invents these ideas, but “creates hypothetical futures with the ideas used in a practical way.”

Someone asked about the Tall Tower’s shadow–“diffuse, gray, delightful.”

Most memorably, someone in the audience began animatedly offering up their own idea for some sort of force-field glove which would propel fireballs, just incredibly off-topic. I was sort of baffled, as we were talking about the Tall Tower, and expecting another question, but Stephenson just rolled with this new idea. He suggested some things to think about related to projecting fireballs, saying he knew some people who did amazing stuff with fire, and to a round of applause, concluded that “any engineering problem can be solved–you just have to figure out your objective and the legal ramifications.”

Newitz said at one point that the most audacious thing about Hieroglyph is that these stories focus on humanity surviving. I think this is a huge, interesting point, and I tend to agree. There is quite a bit of fatalistic, dystopian fare out there right now. Do we really think we’re that bad?

I hadn’t ever heard of Charlie Jane Anders, but her commentary made me definitely want to check out her work. Also, Rudy Rucker seemed wildly wise, like some sort of buddha in writer’s garb, and I’m excited to read his stuff as well. 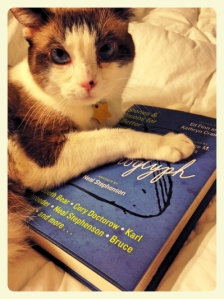 The conversation is ongoing, as Project Hieroglyph itself is designed to be an interactive and open experience–don’t let the book’s pages, with all their permanence, fool you. You can contribute your ideas, and perhaps change the world, or just start changing the world’s story.