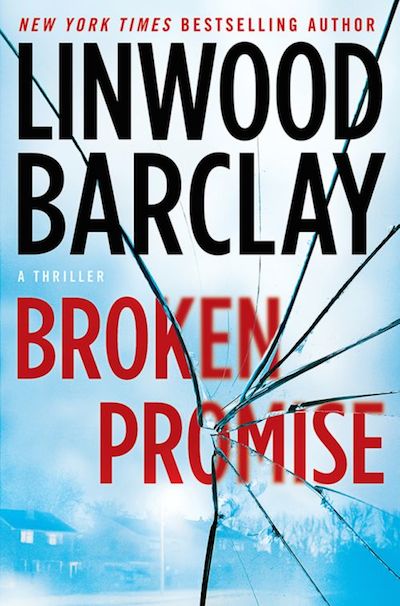 I was excited to dig in to blockbuster thriller writer Linwood Barclay’s Broken Promise after I read his stand-alone mystery Trust Your Eyes. Barclay built Trust Your Eyes around a concept wacky enough to be truly memorable in a field of lookalike plots. A schizophrenic man obsessed with a Google Street View-like program, who spends his hours touring streets all over the world, sees something he shouldn’t. Trust Your Eyes is definitely worth picking up, if you haven’t checked it out!

So what about Broken Promise? It centers in Promise Falls, a small town with all the dressings: cops with inflated egos, an amusement park and newspaper both gone belly up, and a nefarious ex-Mayor circling for power. As I went into the book cold, I didn’t realize that Broken Promise is the first of a planned trilogy about Promise Falls. So (a bit of a spoiler alert here), those expecting loose ends packaged up nicely in a bow, be prepared! You’ll have to wait for books two and three to find out what’s rotten in this not-so-ideal American setting.

And there’s definitely something stinking in this city–attempted rapes on the college campus, squirrels hung in an odd formation in a local park, mannequins with a veiled threat riding on the Ferris wheel in the abandoned amusement park after hours. In the midst of some of this madness is out-of-luck journalist David Harwood, who returned to his hometown of Promise Falls for a job at the local paper just before it went out of business. Now he’s unemployed, and living with his parents and his young son.

While the strange happenings in Promise Falls are intriguing background noise, the main plot of this novel centers around David’s cousin Marla. Marla’s been slightly unhinged since she lost her baby a few years ago. When David arrives at her home to deliver some food, and finds Marla caring for a baby boy, he knows something isn’t right.

This mystery wasn’t my favorite–it seemed fairly obvious to me, once all the characters were introduced, what exactly had happened. However, because I’ve enjoyed a previous book from Barclay so much, and because he’s so highly praised as a popular thriller author, I’ll be tuning in to the rest of the series and seeing what’s in store for David and the town of Promise Falls.