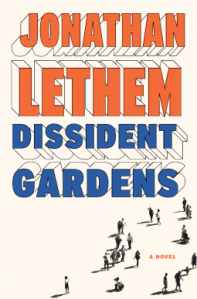 I’m a huge fan of Jonathan Lethem.  His books are always oddness worded authentically, and I think he is able to capture a lot of the bizarre struggle of life we go through in a way only the greatest authors can.  My favorite of his books are the ones considered the more genre-fied odd ducklings of the bunch, such as This Shape We’re In, Gun, With Occasional Music, and As She Climbed Across the Table.  I think the fact that he can dabble in different genres (like Margaret Atwood is so easily able to) is a testament to his ability to write great stories, regardless of their setting.

Lethem’s newest novel Dissident Gardens, released last month, is not a genre novel.  The story documents the struggles of three generations of a radical Leftist family.  Rose is the almost-Jewish Communist matriarch, “a dark tower, a ziggurat.” Struggling to escape mom’s shadow, “like crawling out of a bomb crater,” is daughter Miriam; a cool, confident hippie chick in the way only the daughter of a rebel can be.  Miriam’s Quaker-raised son Sergius struggles to find his own identity amidst the mayhem of his history.  Stealing the show is Cicero, a sort of step-son to Rose, a frustrated gay black professor who prides himself on making the simpletons surrounding him uncomfortable:  “Cicero, like Rose in the end, preferred his listeners stunned and bleeding, all masks on the floor, or on fire.”  There has been much talk of what this more realist book means for Lethem – is he growing up, is he demanding respect as a legitimate author, is he giving in to reviewers’ requests that he give up comic books already?  Lethem has a great interview on Slate answering many questions about the book. The summary: the metaphysical here is the concept of ideology, of that intangible better way of living each character is searching for.  And I can certainly dig it.

I was hesitant when reading the summary of Dissident Gardens, because I love a story with bells and whistles (a mystery, an apocalypse, a drug-laced seedy background).  Once I began reading, however, I was reminded immediately that Lethem could rewrite the phone book into something meaningful said in a way I never would have imagined.   His unique but effortless wording had me doing double takes.  Even the first scene, of Communists gathering in Rose’s kitchen, has sentences so well crafted it is hard not to pause and mull over them for a while:  “They’d overdressed, overcompensated with vests and jackets, now arraying themselves on her chairs like some Soviet oil painting, postured as if on some intellectual assignment.  In pursuit of that chimera, the Dialectical Whosis, when really there was to be no dialectic here. Only dictatorship.  And the taking of dictation.”  An ocean atmosphere is “noon-luminous”, Cicero allows his class to sit in silence and “plummet into that abyss of the inexpressible where the truth lies.”

The intensity and accuracy with which Lethem allows his characters to document their emotional landscapes, and the room with which he gives them to grow large in his words, remind me here of that other Jonathan who has created epic American family dramas, Jonathan Franzen.  And like that other Jonathan, Lethem shows us everything it is to be part of a family, everything there that isn’t as simple as love.

The surreal feeling of past books is there, when Miriam competes in a TV quiz show and begins to have almost hysterical fantasies under the blinding studio lights.  It is there as Rose falls for, and meets, Archie Bunker.  The surrealism is there as these characters reach out for a sense of certainty in their beliefs, struggling to reconcile an imagined idealism with the harsh realities laid out before them.  Lethem shows us that struggling through true life, with bizarre self-talk and strings of random experience molded into belief, can be just as disorienting as any supernatural tale.