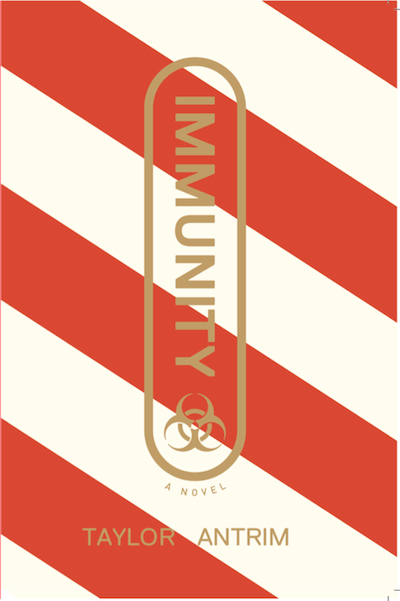 What’s natural is the microbe.

All the rest–health, integrity, purity (if you like)–is a product of the human will, of a vigilance that must never falter.

—Immunity, epigram, from The Plague by Albert Camus

Officials said the best line of defense was vigilance. Report symptoms immediately. Yours. Family members’. Friends’. Get the TX test every three months. Ninety Days… It’s the Law ran the ads. Carry your MED card at all times. Don’t gamble with symptoms. Don’t travel if you’re sick. These messages had been drummed into the public through news and magazine stories and stacks of bestselling how-to books on surviving another full-scale TX pandemic–which would come, the scientists said. It was just a matter of time.

Taylor Antrim’s Immunity tells the story of a post-plague world, a Spanish flu-like epidemic (named TX, after the state of its origins) adapted for our modern times. The Department of Health has ballooned into Big Brother, setting up checkpoints on corners and scanning bodies on sidewalks. Anarchists cough on people as an act of rebellion, terrifying everyone they hack and sneeze at as they run madly through the streets. And then there’s the rich, that ever-present buzz of an upper-class doing better than the rest of us, hovering above the fray, as the elite do, and ready to take some sort of action.

In Antrim’s post-pandemic New York, the wealthy get bored and things get ugly. Protagonist Catherine finds herself, after a vague job interview, working in a sort of concierge call center for the city’s wealthy men. Requests like the perfect gift, reservations at a great restaurant–you give these gals a call, and they’ll take care of it for you. But there’s a bigger vision behind the company, an idea of real experience taken to an uncomfortable maximum level. There’s a place called The Hideaway, there’s an endless supply of coke and booze. And then the guns come out.

Aside from this plot, a sort of rich men gone wild, Catherine is implanted with what promises to be a chip providing immunity from the TX virus. A perk of the job, of being amongst the rich and elite. But nothing is so simple in this complicated world, and nothing comes for free.

The New York Times book review hails Immunity as an “effortlessly assembled” novel. After reading the Times’s triumphant review, I bought Immunity in a sort virus-mad fervor, imagining a book full of dreary desperation and high stakes health risks like David Quammen’s non-fiction tome Spillover. What I got, the plot and statement made by Immunity, was far from what I imagined. I’m still not sure what to make of it. It’s different. It’s strange in a 12 Monkeys-conspiracy-The Most Dangerous Game type of way. Instead of being the usual dystopian fare, Immunity questions our desire for dystopia in general, and our need to take the power back from greater traumas surrounding us.