Gregory Boyle Brings Boundless Compassion In ‘Tattoos on the Heart’ 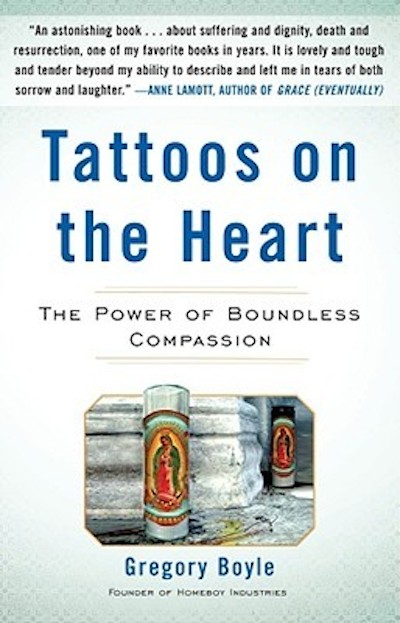 No daylight to separate us. Only kinship. Inching ourselves closer to creating a community of kinship such that God might recognize it. Soon we imagine, with God, this circle of compassion. Then we imagine no one standing outside of that circle, moving ourselves closer to the margins so that the margins themselves will be erased. We stand there with those whose dignity has been denied. We locate ourselves with the poor and the powerless and the voiceless. At the edges, we join the easily despised and the readily left out. We stand with the demonized so that the demonizing will stop. We situate ourselves right next to the disposable so that the day will come when we stop throwing people away.
― Gregory J. Boyle, Tattoos on the Heart: The Power of Boundless Compassion

Boyle, or simply G as he is called by those who know him best, is a Jesuit priest and founder of Homeboy Industries. Homeboy built itself up out of the Dolores Mission in a small area of Los Angeles considered the gang capital of the world. G and Ray Stark, a successful movie producer, bought an old bakery, found an old tortilla machine, and decided to bring rival gang members together in what would be called The Homeboy Bakery.

After a young man arrived with a tattoo of “Fuck the World” across his forehead, asking for assistance in finding a job, they realized they also needed to provide ex-gang members with tattoo removal services.

Homeboy Industries has grown into a thriving resource for ex-gang members seeking employment, tattoo removal, and huge amount of other resources. They offer ex-gang members employment through cafes, a printing company, a bakery, and other avenues.

Tattoos on the Heart is not only G’s story, but the story of the homies. G’s couldn’t tell his story without theirs, as they are totally intertwined. They call him in the middle of the night for a ride home from prison. They shoot up his neighborhood in the afternoon, and he chases them down. These are his kids, and every step of the way he loves them. They live, and they die, under his compassionate guidance.

It is hard to understand how a book can be so funny and so sad all at once. But this is a hilarious, heart-breaking book. It is religious, with G offering teachings from a variety of faiths and spiritual leaders, but never zealous. This is a book about God, but don’t let that scare you. It is also a book about boys with tattoos and baggy pants trying to learn how to be men in a world that has largely forgotten them. It is brief (just over 200 pages), moving, and powerful.

Tattoos on the Heart on Amazon.com/Powell’s.com/Indiebound.org