Spillover vs. Ebola: Which David Quammen Book Should You Buy? 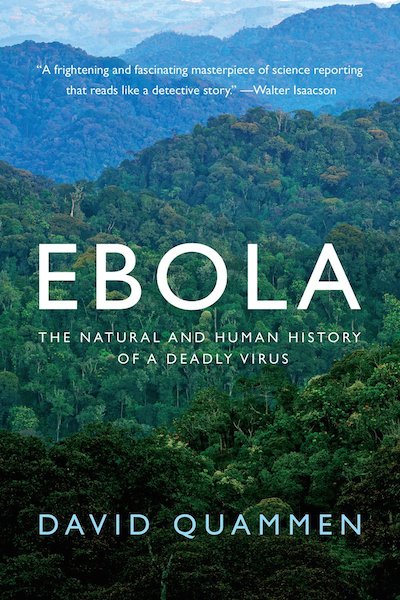 A few months ago, Africa’s Ebola epidemic was the worst in history and infected physicians were being moved to America for treatment. My Facebook feed was filled with trending topics and endless questions about Ebola, and I wrote a post recommending David Quammen‘s enlightening Spillover as the important book of the day.

Spillover focuses on zoonotic diseases, those which make the jump from animals to humans in events called spillovers, thus the title. Ebola is one of these, as are Rabies and Lyme Disease. In Spillover, Quammen clearly weaves an in-depth narrative through rough African terrain, seeking the history of the Ebola virus in small villages and sick apes.

Now, as Ebola has made it to America in a less controlled setting, David Quammen has released a second book, called Ebola: The Natural and Human History of a Deadly Virus. It is explained as “extracted from Spillover by David Quammen, updated and with additional material.”

So, which should you buy? If you’ve already read Spillover, is Ebola worth buying for the additional information?

The short answer is: no. If you’ve read Spillover, don’t spend your money on Ebola. You’ve already read it. It is more than 80% of the exact same material, edited slightly so as to not be in discord with current events. If you haven’t read anything yet, however, Ebola has all the information you need on this history of and basic information surrounding Ebola, without all the other zoonotic disease information of Spillover.

Ebola contains a new introduction and epilogue that are, as rapidly as things are changing, now out of date. The epilogue does contain a brief history of outbreaks in Africa (Quammen traces them back to December 2013, in the Guéckédou prefecture of Southern Guinea), but it doesn’t contain any information about the events in Dallas. The summaries here are nothing like the research done examining previous outbreaks, and Quammen makes it clear in a disclaimer that he hasn’t traveled to the areas experiencing the epidemics currently.

If you want to learn about the Ebola virus and diving into Spillover‘s nearly 600 page, detailed history of zoonotic diseases doesn’t sound appealing, then Ebola is the perfect book for you. It is the ideal book for the non-reader and the person in a rush, as Spillover‘s very long chapters have been broken up into very brief chapters. All the necessary information is there, in digestible bites, in a brief 128 pages.

Ebola: The Natural and Human History of a Deadly Virus on Amazon.com/Powell’s.com

If you aren’t at all bookish and CNN’s “We’re all going to die” style of journalism has you holed up in your home with a gas mask, there are some other great resources out there as well.

Pretty shocking rev on US #Ebola guidelines: http://t.co/UkY2e6SIEY. Maybe John McCain is right abt that czar.

Vincent Racaniello, Professor of Microbiology & Immunology in the College of Physicians and Surgeons of Columbia University.

Obama will name Ron Klain as Ebola Czar http://t.co/HHiZWDsrlc – if true, a disaster. A lawyer who knows nothing about viruses

Important Book of the Day – Spillover by David Quammen 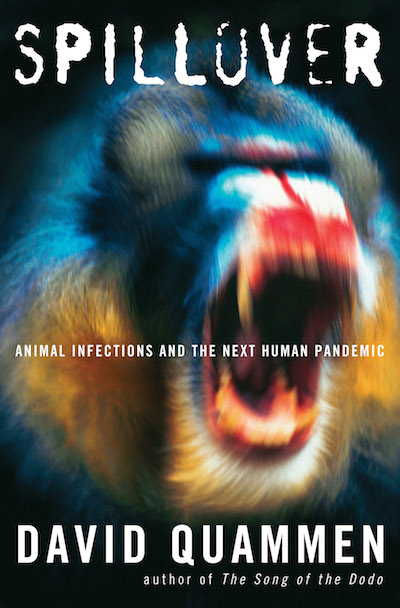 Let’s keep an eye on wild creatures. As we besiege them, as we corner them, as we exterminate them and eat them, we’re getting their diseases.
–David Quammen, Spillover

I find myself referring to David Quammen’s Spillover quite a bit lately, as the most severe outbreak of Ebola in history spreads through West Africa. An Ebola-infected doctor has returned to Atlanta for treatment, and all sorts of questions are popping up about zoonotic diseases and their effects. This outbreak has acted as an instant reminder that we all need to care about zoonotic diseases, and that we can’t dismiss them as the concerns of health-care workers or those on other continents.

David Quammen is an award-winning science writer, and Spillover, as an almost 600 page exploration of zoonotic diseases, would be an unbearable read if it wasn’t for Quammen’s honest but bold ability to weave the stories together. Rather than coming across as a textbook, despite the almost incomprehensibly complicated subject matter presented at times, this reads as true thriller, perhaps the scariest thriller you’ll ever read.

Quammen meets brilliant, interesting researchers who are incredibly afraid, and the story of the Hendra virus is told not through numbers or complicated terms but through the story of that first dead mare, Drama Series. Who found her, and what happened after that.

Spillover reveals a world in which humans are pushing up against the wilds once left to animals, and animals are, in turn, making us sick. There’s Drama Series and her untimely demise. And then a chimp on a river, and the agonizing, winding story of SIV and HIV and the possible emergence of AIDS. Throughout these tales, research citations, developments from history, and thoughts from the scientific community create a full picture.

I never understood how exactly zoonotic diseases worked until reading this book. I never understood why Bird Flu was called Bird Flu, or even that the flu came from birds at all. I didn’t know what all those numbers and letters meant that go along with the next flu threat, labels ascribed to some sort of emerging potential pandemic. Spillover taught me the basics of all this, what exactly is rational fear and what doesn’t make sense or seems to be media hype, and even why getting my flu shot each year is so important.

Quammen manages to convey huge amounts of information to his reader without losing the story’s gripping narrative. As the outbreak continues in Africa, and as Ebola lands in Atlanta, albeit in a highly controlled environment, it seems a very good idea to educate yourself on the basic ideas of zoonotic disease.

Spillover by David Quammen on Amazon.com/Powell’s.com/Indiebound.org

The Bone Season by Samantha Shannon – What went wrong? 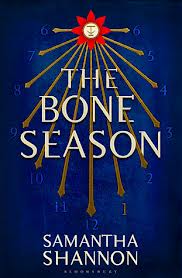 I recently read the “highly anticipated” novel The Bone Season, by Samantha Shannon.  Reading this book just confirmed two of my beliefs:

1)  Marketing campaigns can easily hurt the books they are promoting.

2)  The best non-fiction authors do an amazing job of incorporating facts seamlessly into their stories.

First, point one.  Marketing campaigns can hurt books and disappoint their readers.

All the readers who reviewed The Bone Season on Goodreads seemed to feel the same way about it I did.  Way too much information being thrown out, with a beginning that is almost comical thanks to its info-dumping.  I wanted to love this book so much (as did every other reviewer on Goodreads, it seemed).  A cool young woman publishing a hit?  What isn’t there to love about that story.  Someone, somewhere compared this poor girl to JK Rowling and immediately set her up for failure.  As we saw with The Cuckoo’s Calling, JK Rowling’s writing can’t even build a new JK Rowling-level of success.  The blurbs for this book are also overly optimistic–U.S.A. Today called The Bone Season a combination of George Orwell and J.R.R. Tolkein!  No pressure, right?  What this means is the expectations for The Bone Season were incredibly high.  Readers were expecting an Orwellian brand-new Lord of the Rings series that could create a Potter-worthy hysteria.  With that sort of hype, of course readers are going to be disappointed.  I often feel this way when a book is declared a “hit of the summer” or “next Girl with the Dragon Tattoo” or “new Hunger Games”.

In Janet Maslin’s brilliant and brutal review of The Bone Season at the New York Times, she calls it “a human interest story, not a book.”  She points out that much of the hype around the book has been on the author and her success-the movie options, the money.  Obviously the average reader isn’t looking for a literary masterpiece, but the fact that books have become hollow hype machines similar to blockbuster movies is something to notice.

How would I fix The Bone Season?  Clearly there is a world inside Samantha Shannon that needs to get out.  We all want to hear about this world she has created and fall in love with it, we just need her to show us what its like there.  I would start with Paige at the protests in Ireland when she was six.  Make that the introduction to a book entirely based upon Scion’s beginnings in a world which sees ghosts, and Scion’s growth from Paige’s view.  Cut the rest of the plot, with its aliens and secret islands.  Get rid of some action and focus on the context.  I would focus on conveying all that information thrown at us in The Bone Season’s first chapter into an entire book, tidbit by slow tidbit.  Once we understand the creepy world under Scion rule in a clear way, other books could bring in more information.  The second book could focus on Paige’s gang, and allow us to get to know them better.  And maybe, by the third book, when all this information is embedded into our memories in a less overwhelming way, we could approach the whole alien demon species thing.  We’re all cheering for you, Samantha, but please give us something we can work with next time!

There is some absolutely great and really dark stuff in The Bone Season.  The idea of masks that seal to a person’s face, making them unrecognizable, was wonderful.  The terms of endearment were beautifully executed in the dialogue, pulling off a new-world slang that rang true.  There is a lot of great stuff here, and I will definitely read the next book with hopes of a smoother story.

The Bone Season on Amazon.com