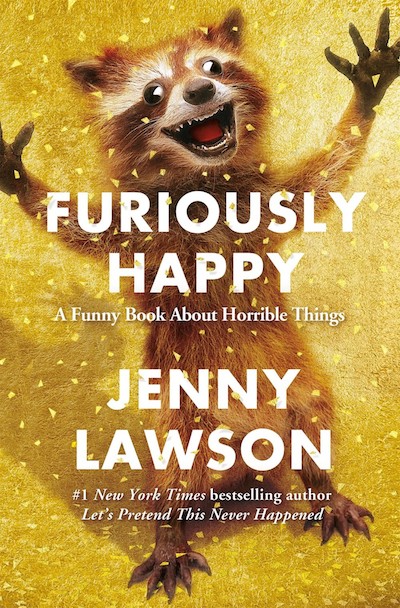 Without the dark there isn’t light. Without the pain there is no relief. And I remind myself that I’m lucky to be able to feel such great sorrow, and also such great happiness. I can grab on to each moment of joy and live in those moments because I have seen the bright contrast from dark to light and back again. I am privileged to be able to recognize that the sound of laughter is a blessing and a song, and to realize that the bright hours spent with my family and friends are extraordinary treasures to be saved, because those same moments are a medicine, a balm. Those moments are a promise that life is worth fighting for, and that promise is what pulls me through when depression distorts reality and tries to convince me otherwise.
― Jenny Lawson, Furiously Happy: A Funny Book About Horrible Things

Despite the above quote, which represents the more meaningful aspects of Furiously Happy, Jenny Lawson‘s second memoir is hilarious. She’s hilarious in the same way a person sliding from tipsy into totally wasted is hilarious. She’s funny in the same carefree way a toddler is funny, just wandering way out there past social norms to the unexpected. Lawson is like a wildly manic, taxidermy-loving bus driver taking all her readers on a thrill ride through her emotional landscape, her relationship with her deadpan husband Victor, and her quest for a taxidermied camel.

Lawson writes in a style all her own, a very modern, pulled-from-the-blogosphere stream-of-consciousness. The book is full of her struggles against spellcheck, constant asides, and interjections. Although the effect is jarring at times, it is 100% Lawson. Her personality is quick and jumpy, sliding with ease from a joke into a serious discussion of depression. The momentum of her language matches her message here. The concept of being ‘furiously happy’ as a push back against the suffering of mental illness, a crazy sort of joy that pushes you to do more and feel more because you also experience the dark side of life, comes across in the seemingly endless energy Lawson throws into every joke.

Such a unique style, such a unique person, can take some getting used to. Full confession here, I tried to read Lawson’s first memoir, the much raved about Let’s Pretend This Never Happened, and her writing style bothered me so much I stopped. I was shocked that such a praised book was written in such casual starts and stops, and I didn’t get very far before giving up. But after reading Furiously Happy, I think I understand the spirit behind Lawson’s tone, and I want to go back to Let’s Pretend This Never Happened.

And, second full confession here, without even realizing it, I’ve been living my life the Lawson way. I too am a furiously happy person! I also struggle with anxiety and depression, as well as chronic pain, but drink a ton of coffee and am so chipper I often frighten people with my wide smiles and cheerful hellos. I love to live life big and full, because I’ve seen way down those dark nooks and crannies. So all of Lawson’s philosophies in this book (okay, maybe not the taxidermy stuff as much) had me saying yes, definitely, yes.

If you’ve ever felt like the craziest person in the room, Lawson is here to tell you that she’s felt that way too. And instead of getting upset about it, she’s going to find a taxidermied raccoon, crawl out from under that table, and then get furiously happy.