In Until You’re Mine, All That She Wants Is Another Baby 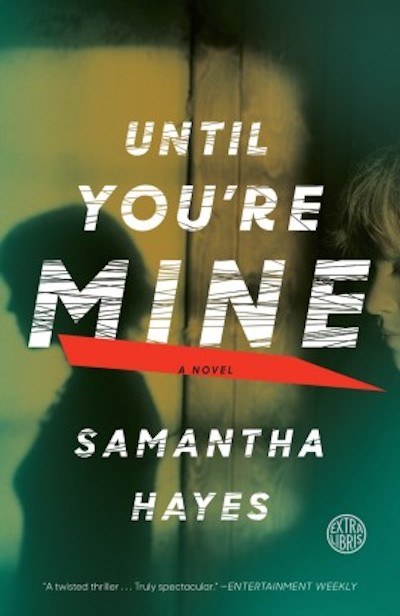 Before there were girls riding on trains, getting blitzed and forgetting the murderers in their lives, there was Samantha Hayes. She has a new book out in a few weeks, about a small town rattled by a wave of teen suicides. But before its release, I wanted to go back and talk about one of her earlier thrillers, Until You’re Mine.

I’m at that age, early thirties, where everyone is getting married and getting pregnant. So are the characters in this thriller, but with much deadlier results than an avalanche of wedding invites and adorable Facebook photos.

Claudia Morgan-Brown has married into the life of her wildest dreams–two little boys and a baby girl on the way. Her husband, a successful military man, spends much of his time on a submarine. So before his next departure for a training exercise, she finds the somewhat strange but competent Zoe to nanny her sons and be on hand as help for the new baby’s arrival.

Meanwhile, DCI Lorraine Fisher is called to a vile crime scene. A pregnant woman has been slaughtered, along with her unborn child. Fisher and her husband, an exhausted, bickering, crime-fighting duo who remember their own teenagers’ school appointments in the midst of interviews, investigate the murder and hope it doesn’t develop into a pattern. Certainly, this unimaginable crime must be the work of a vengeful boyfriend, a jilted lover. Right?

These two stories build separately, and then slowly draw towards each other, in the way only great suspense can. At many times I thought I had this book figured out–as I read so many mysteries, and try to solve them myself reading along, at every turn I dismissed this as simplified or too obvious. But then I got to the totally surprising, beautifully done ending, which wrapped up all these separate parts in a satisfying way. So many thrillers pull off a great twist but leave questions unanswered. Not here!

Until You’re Mine on Amazon.com ($1.99 on Kindle right now!)/Powell’s.com/Indiebound.org

[…] Hayes proved herself a master of the red herring with the first book featuring DCI Lorraine Fisher, Until You’re Mine. I recommend it, although you don’t need to read it to pick up What You Left […]