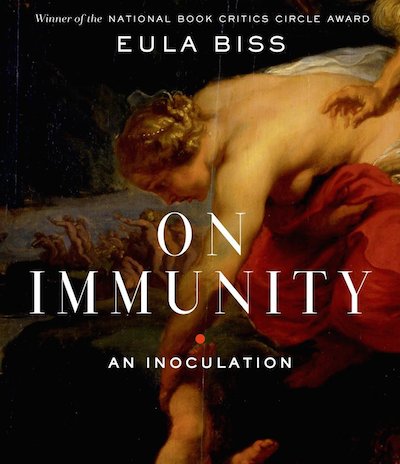 In Eula Biss’ short On Immunity: An Inoculation, she takes a step back from the vaccine debate and looks at its framing, its history, and the concept of the self as impermeable by society.

As the mother of a young son herself, her fear for his safety is raw and present on every page. This is a meditation on how much mothers want to keep their children safe, how impossible that is, and just what that struggle looks like today.

In short chapters, the history of vaccination, the symbolism in Bram Stoker’s Dracula, and the vulnerability associated with breaking ones’ skin all collide with Biss’ own fears of raising an allergic young toddler.

Biss brings together a web of haunting information, exploring the deep-rooted fears we have against the unknown other and those walls we throw up to keep the self safe.

She explains that conscientious objectors, before they were soldiers unwilling to go to war, were those unwilling to get vaccinated. That in 2013, nine polio vaccinators were shot in Nigeria. This isn’t just an American issue–it is global, historic. Whether wealthy Americans are struggling with the idea of chemicals, or Nigerians are questioning vaccines from a Western world that doesn’t assist with other basic healthcare, vaccines ask us to gain immunity by becoming a part of the community. By joining in, rather than edging out.

As many of the moms I know are simply too busy to read (this is a short one, worth picking up, clocking in at less than 200 pages of reading content), I thought I’d cite some snippets of Biss brilliance.

On the dualism of the vaccine debate:

‘I know you’re on my side,’ an immunologist once remarked to me as we discussed the politics of vaccination. I did not agree with him, but only because I was uncomfortable with both sides, as I had seen them delineated. The debate over vaccination tends to be described with what the philosopher of science Donna Haraway would call ‘troubling dualisms.’ These dualisms pit science against nature, public against private, truth against imagination, self against other, thought against emotion, and man against woman (49).

On viewing “natural” as safe:

And when comfort is what we want, one of the most powerful tonics alternative medicine offers is the word ‘natural.’ This word implies a medicine untroubled by human limitations, contrived wholly by nature or God or perhaps intelligent design. What ‘natural’ has come to mean to us in the context of medicine is ‘pure’ and ‘safe’ and ‘benign’. But the use of ‘natural’ as a synonym for ‘good’ is almost certainly a product of our profound alienation from the natural world (40).

On vaccination as a metaphor:

‘Our bodies prime our metaphors,’ writes James Geary in I Is an Other, his treatise on metaphor, ‘and our metaphors prime how we think and act.’ If we source our understanding of the world from our own bodies, it seems inevitable that vaccination would become emblematic: a needle breaks the skin, a sight so profound that it causes some people to faint, and a foreign substance is injected directly into the flesh. The metaphors we find in this gesture are overwhelmingly fearful, and almost always suggestion violation, corruption, and pollution (12).

Debates over vaccination, then as now, are often cast as debates over the integrity of science, though they could just as easily be understood as conversations about power. (26)

And the CDC data to support it:

On the privilege of fearing invisible things:

It is both a luxury and a hazard to feel threatened by the invisible. In Chicago, where 677 children were shot the year after my son was born, I still somehow manage to find myself more captivated by less tangible threats. While two-year-olds take bullets in other parts of the city, I worry over the danger embedded in the paint that chips off my child’s toys and the walls around him (132-133).

And the danger in doing this:

If we understand ourselves living in a world of unseen evils, the immune system, that largely conceptual entity devoted to protecting us from invisible threats, will inevitably take on an inflated importance and a distorted function (133).