Review – The Leftovers by Tom Perotta 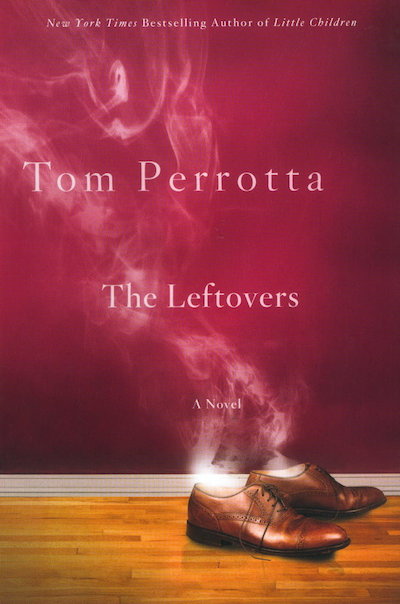 Tom Perotta’s 2011 novel, The Leftovers, about a town recovering from a rapture-like event, is the basis for HBO’s brooding new series of the same name. Perotta is no stranger to book-to-screen adaptations: he wrote both Little Children and Election.

The Leftovers, as a novel, has little of the darker style and mysterious mood conveyed with in the HBO series. The novel feels overwhelming, funny, and sad in the same way that Colson Whitehead’s Zone One feels overwhelming, funny, and sad. Perotta and Whitehead delve into what happens after an immediate global crisis begins to fade, and people must keep on living daily life. Survivors realize there is laundry to be done, homework to be completed, and small talk to be made at the dinner table. While Whitehead explores the equivalent of day-in-day-out garbage removal in a post-zombie apocalypse city, in The Leftovers, Perotta creates a more open, and perhaps more intriguing, concept.

If you haven’t been watching the show, here’s the general plot summary for both the novel and the series: a “random harvest” of people throughout the globe has disappeared, in an event neutrally coined as the “Sudden Departure.” Immediate panic subsides as the event seems to be a singular occurrence, and government investigations find no clear answer or medical explanation. Connections to the rapture are obvious, but are in constant debate as those who disappeared seem so remarkably random, and not of one religion or belief system. The Leftovers, as the title indicates, is not the story of the event itself but of that time when life must go on, post-Sudden Departure. We join those left behind in a quaintly small town, as they try to pick up the pieces of society or encourage those very pieces to fall apart.

Those who want to move on from the event struggle in private ways, and those who think there is an insanity in seeking normal life after such a disastrous event gravitate towards one of the various fringe groups which develop in response to the Sudden Departure. Each cult seeks to put their own spin on the tragedy, often with destructive results.

There are quite a few negative reviews of the novel, which I found surprising. It was highly praised on its release in 2011, and has been sitting on my Amazon Wishlist for years. I found it be an ultimately jolting, but mostly beautifully meditative, examination of how we try to heal from things by claiming them as our own. We seek to possess tragedy in a way that ends up destroying us. As other reviewers note, there is a bit of shock at the ending, so if you invest in only positive endings in your reading then I’d suggest avoiding books about a post-Rapture world in general.

Now to what people really want to know–how does the novel compare with the show?

If you like the show, should you get the book? I think it depends on what you like about the show. Stylistically, the show presents post-Sudden Departure life as intriguing, while the novel goes for the tone of people living through just another day. I think this difference adds a level of mystery to the show which wasn’t sought in the book’s original tone.

What the book does have is Laurie’s thoughts, as she goes about her days at the Guilty Remnant. With much narration from Laurie’s perspective, the reader learns about the Guilty Remnant, Laurie’s motives, and the history of the Sudden Departure and her family. This would be impossible on the show, as Laurie has taken an oath of silence and a voice-over narrating her thoughts would be incredibly awkward.

If you’re curious to know more about both cults presented, the Guilty Remnant and Holy Wayne’s group, then the book has your answers. But if you are seeking some sort of greater-than-human explanation, prepare to be underwhelmed. The tone of the book is plain, the actions people take in the book are those of desperate, scared people, and none of it is dressed up by Liv Tyler’s beauty or haunting music (nothing against these two things–just don’t be disappointed in the book, when they aren’t there).

The book mainly focuses on the Garvey family, and there are many characters mentioned in passing in the novel which the show seems to have fully fleshed out. If we see more of this, the post-Sudden Departure storyline planted in the book could grow much larger in the series. I’m interested to see if the show will follow the book’s actual plot. If it does, due to the jarring ending I mentioned before, it seems like they may have quite a few unhappy viewers on their hands. For this reason, if you’re worried about spoilers, I’d recommend holding off on reading the novel until the series is finished or led so far astray the original storyline the spoiler risk seems minimal.

Tom Perotta is working on the series as a co-creator, writer, and executive producer, so he definitely could have started something in the book that he could finish in the series, exploring how society deals with an event that feels catastrophic, but maybe not catastrophic enough. When bad things happen, Perotta seems to be asking us, should the wheels keep turning? Or should they fall off?

The Leftovers by Tom Perotta on Amazon.com/Powell’s.com/Indiebound.org

The Leftovers on HBO, Sundays at 10PM

I completely agree with your take on both the book and the show. The Silver Linings Playbook also comes to mind as a book to screen adaptation where some serious liberties were taken in the transfer. While I don’t think that particular effort was effective, The Leftovers works well, and I watch every week (if for no other reasons that Justin Theroux is compelling and the priest is sympathetic).

The comparison to Zone One was interesting, as I put that one back in the shelf. After reading your review, however, I’ll be giving it another chance.