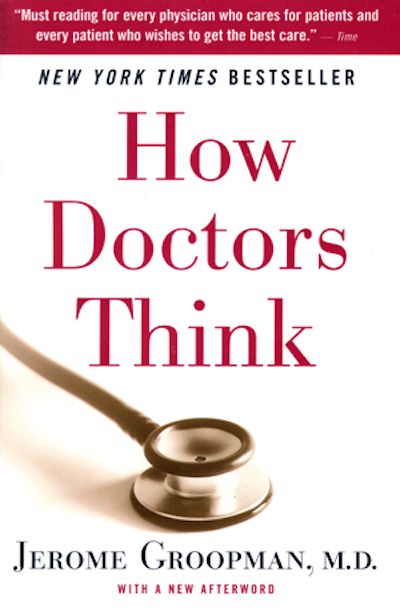 Medical students are taught that the evaluation of a patient should proceed in a discrete, linear way: you first take the patient’s history, then perform a physical examination, order tests, and analyze the results. Only after all the data are compiled should you formulate hypotheses about what might be wrong. These hypotheses should be winnowed by assigning statistical probabilities, based on existing databases, to each symptom, physical abnormality, and laboratory test; then you calculate the likely diagnosis. This is Bayesian analysis, a method of decision-making favored by those who construct algorithms and strictly adhere to evidence-based practice. But, in fact, few if any physicians work with this mathematical paradigm. The physical examination begins with the first visual impression in the waiting room, and with the tactile feedback gained by shaking a person’s hand. Hypotheses about the diagnosis come to a doctor’s mind even before a word of the medical history is spoken.
–Jerome Groopman, How Doctors Think

I’ve had some notably bad doctors’ appointments. According to How Doctors Think by Jerome Groopman, as a patient struggling to communicate with doctors, I’m not alone. The book opens with the true case of a young woman incorrectly diagnosed for fifteen years (!!!) with anorexia nervosa with bulimia, when she actually had celiac disease. As her weight kept drastically lowering, she was encouraged to eat simple carbohydrates in the form of cereal and pasta to gain weight. She consulted, according to Groopman, “endocrinologists, orthopedists, hematologists, infectious disease doctors, and, of course, psychologists and psychiatrists.” All of them missed the diagnosis of celiac. Out of desperation, the woman went to see a gastoenterologist, who looked beyond the previous diagnoses and discovered that it was the very foods she was encouraged to eat which were making her ill.

As the title suggests, this book is a sometimes terrifying, sometimes triumphant exploration of the way doctors think. Groopman talks to colleagues and experts in many different fields of medicine about their mistakes regarding judgement or emotion, the errors they often see other doctors making in practice or training, and cases that were remarkable because of their success or failure.

Groopman is a doctor himself, but that doesn’t keep him from needing medical care, and one chapter is devoted to his experiences seeking treatment from hand surgeons for his painful, inflamed wrist. Many of the top-rated surgeons present him with nonsensical diagnoses, and seem rushed or reluctant to answer questions. If this is how a fellow doctor is treated, I wonder, how can any of us without medical training expect to fare in this world of 15 minute appointments?

But this is why Groopman wrote How Doctors Think –to give those of us who can’t normally get inside a doctor’s brain, and may feel quite uncomfortable sitting in an exam room garbed only in a paper gown, a chance to communicate more clearly with the people who often make snap judgements about our health and livelihoods.

Groopman gives practical suggestions, including language or phrases patients can use to help doctors avoid cognitive errors. He recommends that patients acknowledge stereotypes they may fall into, as doctors rely on pattern recognition to do their work quickly and usually place patients into stereotypical categories. Acknowledging that you come across as a bit neurotic, but you do think you have a health condition despite this, can prevent a doctor from dismissing your concerns as hypochondria. He suggests mentioning your main fear to your doctor, even if it is something you saw while Googling or heard as a horror story about a friend of a friend. He also suggests discussing it directly if your doctor is having a hard time communicating with you or seems to dislike you. (However, when doctors were asked what they would do if they were seen as a patient by a doctor who had difficulty communicating, they answered that they would just get a new doctor.) I absorbed as a crucial point of the book that acknowledging medical care as a relationship consisting of communication between two people, with emotions and judgements and all that comes along with two individuals, can result in better health care.

There are some alarming statistics mentioned and then not explored too much–that doctors like sick patients the least, and that the physical symptoms of the mentally ill are often neglected, as their complaints are written off as part of their mental illness. If there was one thing I found unbalanced in the book, it was a lack of exploration surrounding the studies cited about doctors’ feelings towards their patients and medical bias in general.

Most of the book consists of Groopman’s interviews with other medical specialists about their thoughts on how they, and other, doctors think. They share with Groopman the memorable times they have been right, and the shattering times they have been wrong. All of this makes a great narrative, but amounts to anecdotal evidence of success or failure in medicine. Most of us aren’t able to see the shining stars of medicine that Groopman speaks with, which makes me appreciate the book’s practical advice more than its stunning examples of life-saving care.

How Doctors Think by Jerome Groopman on Amazon.com/Powell’s.com/Indiebound.org