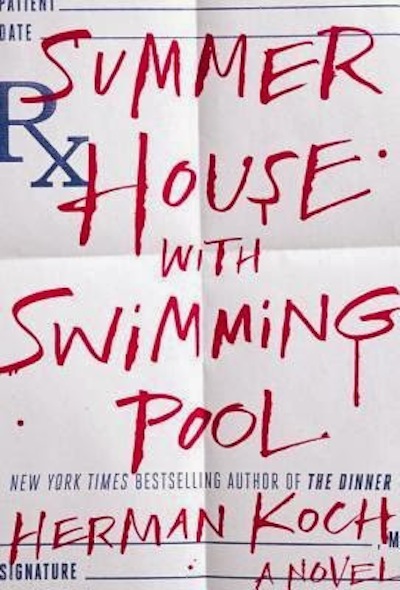 After last year’s English translation of Herman Koch’s internationally acclaimed The Dinner, an agonizing story of the anger and violence dragging under the surface at the dinner table, we know to except something searing and intimate from this master of the slow burn. I expected a car crash of a tale from Summer House with Swimming Pool, vehicles flipped and burned, while I’m left staring and braking as I pass by, unable to speed up and get going and leave the wreckage in my rear view.

I wasn’t disappointed. Koch seems to choose the most mundane names for these books, which drastically juxtapose with their messy and dark guts: a dinner, a summer house, a swimming pool. Simple things. The books, however, take on the most private and tragic of subjects–those around you turning violent and pedophiliac, nights where too much drink goes from fun to bad to irreparable too quickly, choosing to seek revenge on those who have wronged you or your family, allowing revenge to be taken while you sit back and watch the clock.

Summer House with Swimming Pool starts with Dr. Marc Schlosser, general practitioner, revealing to the reader his odd view of his craft and his patients. He seems almost maniacal as he rants of the artists who drink too much and then hide their vices from him, their doctor. He practices medicine with a careless abandon, spending twenty minutes with each patient to ensure they feel attended to while really dismissing most concerns outright. This part of the book, the lead up to the actual meat of the thing, seems to be the weakest, as the Schlosser’s character seems bordering on insanity, unbelievability.

But then, we get past Schlosser’s introduction to his private practice as he recounts what can only be called a tragedy, one of those awkward and beautifully rendered modern family portraits executed so startlingly well by Jonathan Franzen and A.M. Homes in the past. Schlosser and his wife and two kids go camping, and meet up with a patient of Schlosser’s. An actor, with a house. A summer house, with a swimming pool. The booze is flowing and from the beginning things are not quite right–motives are unclear, and Schlosser’s wife wants to leave this new gang of friends. As with so many things, enough small warning signs are ignored, enough unusual events made usual, enough heads turned in the wrong direction, that everything is okay until it all has suddenly, horribly spun out of control. Someone is hurt, and revenge is taken.

I just can’t say too much about this book without giving something or other away, as this is one of those books that illustrates so well our inability to ever truly know those around us, especially those closest to us. Clear your schedule if you pick this book up–I read it in a day or two, unable to stop until I knew what was truly going on, until I’d followed every paranoid twist and desperate turn to the final conclusion.

Summer House with Swimming Pool, just as The Dinner before it, reminds us that every individual has a uniquely intimate private life, swirling with their own motives and fears, their own lies and truths. Koch’s writing deals with, as some of the best writing does, these monstrosities we keep within ourselves or place onto others: the unknowable within us, the rage we hold inside or are unable to hold inside any longer, desires filled or unfulfilled, beliefs rightly or wrongly held. One of the gifts of literature is that we are able to read what other people are thinking, but books like this remind us that we are luckily unable to know what those around us are thinking in everyday life.

Summer House with Swimming Pool by Herman Koch on Amazon.com/Powell’s.com/Indiebound.org

If you like Herman Koch’s writing, try these books: