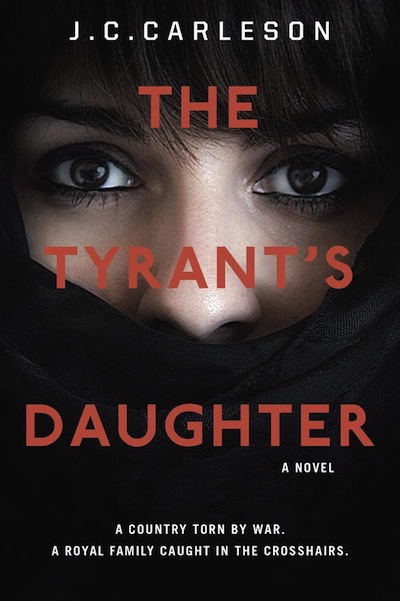 When reading the summary of The Tyrant’s Daughter by J.C. Carleson, I hadn’t even considered it could be a YA novel. Written by a former CIA agent, the book follows an unnamed Middle-Eastern despot’s family after his assassination. His wife, daughter, and son flee to the United States with the help of a shady CIA officer, where they struggle to adapt to life as non-royals while watching their home country self-destruct on TV.

But this is a YA novel, written from the perspective of the assassinated leader’s fifteen-year-old daughter, Laila. Sheltered for most of her life, she’s blissfully unaware of the atrocities her father committed against his people before his death. To her this man wasn’t a tyrant or dictator, but a beloved family member. Laila’s move to the US brings new adjectives used to describe her home and her father, like brutal and tyrant, and she struggles to synthesize new information and old.

The reader sees the world through the filter of Laila’s experience and upbringing: a school dance shocks not only because of the gyrating, but also because the crowd of bodies brings flashbacks of angry mobs. Afflicted with undiagnosed PTSD, Laila steps into classic YA fiction scenes only to be quickly jolted out of them with reminders of how different her own values are from those of American society.

Ideas from this book developed from author J.C. Carleson’s real life experiences as a CIA officer. She spent time in Baghdad in 2003, and saw elaborate playhouses left behind at one of Saddam Hussein’s compounds after he fled, which included multiple levels, an intercom system, and an elevator. This caused her to wonder the mindset of the children playing in such a wonderland–did they understand the circumstances around the man who built them such toys? As these questions stewed in her mind, years later, she noticed her son’s nonchalant reaction to the noise explosions which became a regular part of their life on a military base. Rather than jump to sounds of war, he would simply turn up the volume of the TV.

The Tyrant’s Daughter manages to come across as not ignorantly US-centric, as a book written by an American about the Middle East for young readers certainly could. Maybe because of Carleson’s experience, there is depth here that questions our American world view as insistently correct. Laila’s American friends seem insecure and boy-obsessed, and Laila charts her best friend’s countless style phases through the photos decorating her wall, a reminder that our freedom to express ourselves through clothing never really makes us as comfortable as we’d like. As shocking and flawed as Laila’s own culture seems to be, ours is certainly far from perfect.

The Tyrant’s Daughter by J.C. Carleson on Amazon.com/Powells.com/Indiebound.org

If you liked this book, try these non-fiction titles: