1. The Passage by Justin Cronin, narrated by Scott Brick 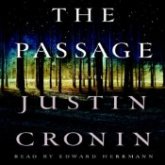 When I speak of The Passage I refer to it as “the epic apocalyptic novel The Passage” each time, as this book’s epicness can not go unmentioned even once in conversation. Scott Brick, the best audiobook narrator known to man, reads this one with the sadness of a dusty old cowboy sitting at a campfire in the middle of the night while vampires are creeping in on all sides around him. Yes, that’s right–The Passage is a vampire book! This doesn’t make it simple, though. It isn’t an action movie disguised in book form, not a vampires-are-sexy sort of book or a teens swooning sort of book. Cronin maps out each gripping and startling detail towards the fall of man and the rise of vampires, and then each step towards survival in the post-vampire world. He builds up such a detailed culture around the historical narrative of the vampire attack, it asks for genealogy and maps and wikis and other such fan-stuff. Cronin’s writing is well paced, informal, authentic, unafraid to take on big ideas and small details. Like the best authors, he describes things in a way that makes them just a bit sharper than real life.  The Passage unabridged has a listening time of almost 37 hours – it is a story that stays with you for a bit.  I recall a friend getting into my car while I was listening to this and being like “OMG is this still that same book?  That book is so long!”  Yes, yes it is. 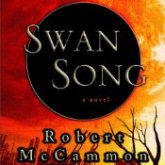 A book that starts with the line “Once upon a time, we had a love affair with fire,” is clearly a winner worth pursuing. This isn’t for the weak (is any apocalyptic listening?), as McCammon lays down a harsh and brutal future, exploring a loss of humanity among people after nuclear bombs fall and things get rough. Listening to Swan Song is like being dropped into a nightmare, and I mean that in the best way possible. Add to the epicness narrator Tom Stechschulte–he reads this book like he’s really mad about it, and it is the perfect tone to take. The unabridged audio of Swan Song clocks in at almost 35 hours–a true apocalypse takes a while.

3. The Stand by Stephen King, narrated by Grover Gardner

Any apocalypse list is incomplete without The Stand—originally published in 1978, and now a classic of post-apocalyptic fiction. The Stand gained a larger audience with a mini-series in the 90’s, and there have been constant low murmurings of a Stand movie in the works. The unabridged audio was released last year in updated format (previously it was on tape), and the tale is the longest on the list at just under 48 hours listening time. Two days straight!

4. Oryx and Crake by Margaret Atwood, narrated by Campbell Scott 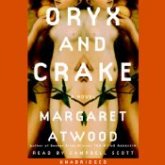 A brief tale compared to the previous three audiobooks we’ve covered, Atwood spins a creative and enchanting story here with less of the gore of much apocalyptic fiction but all of the evil. Atwood can write about anything and make it seem wistfully romantic, and this makes Oryx and Crake all the more sinister. At about 10 hours listening time, you can knock this one out in a single night where you stay awake and force yourself to listen, concerned about the growing number of audiobooks in the world and your lack of ability to listen to them all.

5. Odds Against Tomorrow by Nathaniel Rich, narrated by Kirby Heyborne

So far we’ve covered the classics–the biggest vampire epic novel of recent history, a really long and creepy book from the eighties, and The Stand by Stephen King.  Odds Against Tomorrow is the new kid here. Rich has written an apocalypse for today’s thinking man, for Wall Street Bankers, for capitalist America. He’s written this book for everyone who keeps working even after their office fire alarm goes off. This book is funny, weird, and dark. It approaches apocalypse from a totally different angle, and different is good. Odds Against Tomorrow is also a lesser time investment at 10 hours listening time.

Peter Clines is another fairly new author, but he is here to stay.  This man is serious about his end of the world.  This book is what Chris Matthews is constantly calling everyone on The Bachelor/Bachelorette–a “fan favorite.”  I discovered 14 by looking at reviews of another book on Audible.com, and someone had posted “This book is great but if you have to pick one book right now get 14!  Get this one later!” The urgency convinced me. 14 is another creative apocalypse, very outside the box. A sort of steampunk-ish Clue game of our world’s end. Some people may argue that this doesn’t even qualify as apocalyptic fiction and I would say those people may be right, but check it out anyways. One thing I think is really funny, another author gave this book a blurb that says “A riveting apocalyptic mystery in the style of LOST.”  The TV show?  I think this book has more in common with… books. Again, its a shorty – almost 13 hours.

7. Alas, Babylon by Pat Frank, narrated by Will Patton

That’s right, we’re taking it back. Way back. Alas, Babylon wasn’t the first post-apocalyptic novel (it was originally published in 1959), but it is a quick beautiful read that still has relevance today. Will Patton does a great job narrating, as he sounds smooth like a song, but sad like he knows the bombs have destroyed most of America. Patton clearly knows how to do apocalypse, he was in the movie Armageddon and he currently stars in the alien-apocalypse TV series Falling Skies. He is an expert at experiencing apocalypse. Some novels seem racist, sexist, simple, or just poorly written as time plods on but Alas Babylon maintains its original power.  It is a read-in-highschool novel, as it should be.  For those of us who didn’t get to this one in school, the audiobook clocks in at just over 11 hours.