Review – The Interrogator: An Education by Glenn L. Carle. 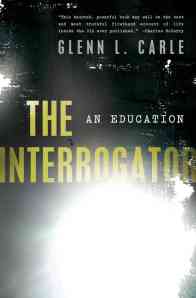 With Claire Danes regularly losing her marbles as a CIA agent on Homeland, and Jessica Chastain doing whatever it takes to get Bin Laden in Zero Dark Thirty, it seemed an appropriate time to read The Interrogator: An Education and glimpse what really happens in CIA interrogations.

Glenn Carle is a career spy for the CIA – he’s traveled the world, telling lies, manipulating agendas, gathering information.  The Interrogator is his memoir of being pulled off a desk job to interrogate a HVT (high value target), code named CAPTUS, possibly affiliated with Al Qaeda/Bin Laden.  Carle begins to realize the man he is meeting with is not the mastermind the CIA wants or needs him to be.  The CIA urges the interrogations to persist, and Carle finds himself in a unique moral dilemma.

Carle seems born to tell this tale – a spy with a penchant towards classic literature, a multilingual Harvard man who is just as comfortable sleeping in the jungle as debating politics and philosophy in the salons of Europe.  A contradiction, he stands as the lone intellectual in what he insinuates to be a meat-headed culture within the CIA.  His love of the classics shines through in his beautiful soliloquies on his situation (and what his situation means for the rest of us) throughout the book.  With an author less concise, these points could have easily strayed towards diatribe or rant.

I was bracing myself for a gore-filled memoir of torture, but this isn’t that book.  The amount of brutality here is limited to that which is suggested to Carle and which he always refuses, saying “We don’t do that.”

What stands out most about this book is what isn’t there – a huge amount of Carle’s account has been redacted by the CIA.  Although CAPTUS is never named in the book, his identity has been deduced as Pacha Wazir.  A Goodreads review lead me to an article called “Unredacting The Interrogator” at Harper’s online which sheds light on Pacha Wazir, as well as the locations featured in the book.

Carle meanders a bit, and the story is made better for it.  He dabbles in the stories of his personal life (his wife has struggled with alcoholism), explains his past and future roles at the CIA, takes time to expound on the inner-workings of the CIA, and analyzes the KUBARK manual and the effectiveness of torture in general.  He ends the book with specific suggestions he believes would improve the way the CIA develops its terrorism intelligence.  The book isn’t all straight information, however.  His writing is haunting, and it is hard to not be reminded of the noir detective fiction of the twenties and thirties as he describes himself as a lone man wandering the streets of a foreign land.

The most poignant scene for me, and the reason I think this book is an important read, is near the end.  Carle has come home from his mission and is at a dinner party.  Knowing he works for the CIA, a woman is asking “Why haven’t they found Bin Laden?  What are you guys doing?  If it was up to me, I’d just grab them all and make them talk.”  Carle’s experience illustrates how complicated a process tracking terrorism truly is, how the CIA is a bureaucracy like all other governmental agencies, how interrogation is a truly intimate process, and how a solution as simple as “making someone talk” by roughing them up is never the solution.