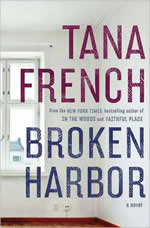 When our shadows showed faintly they were twisted and unfamiliar, turned hunchbacked by the holdalls slung over our shoulders.  Our footsteps came back to us like followers’, bouncing off bare walls and across stretches of churned mud.  We didn’t talk:  the dusk that was helping to cover us could be covering someone else, anywhere.  — Broken Harbor, Tana French

The thrill of a mystery can sometimes be cheap – I just finished a legal thriller, A Case of Redemption, by Adam Mitzner, that reminded me of this.  And that is why Broken Harbor, by Tana French, is so worthwhile.  Tana French has created an experience here, a bizarre world of baby monitors and built up dreams shattered and a development site that seems to be its own House of Usher.  French is a master of language, and although she has written three other books in this series she has chosen this one to reveal herself as such, to come out of the literary closet and really blow us all away with her ability to write a book.  The story is crisply gothic and full of the thinking type of police procedural that makes detective books great; the characters are deep and round and real.  This is definitely one worth reading, as are the first three (In The Woods, The Likeness, Faithful Place) if you haven’t checked them out.

A note on the concept for the Dublin Murder Squad series:  Tana French picks a minor character from the previous book, and focuses on that character for the next book.  And like a chain, the books connect.  French seems such a master at character development, it almost seems a shame to keep running from characters she’s already created, and I wonder if she’ll ever go back to past favorite detectives.  I think it speaks to her skill as an author that she is able to use devices which traditionally frustrate readers, such as ditching main characters and leaving loose ends, and she still has a large fan base.

It did not bode well for my experience listening to A Case of Redemption by Adam Mitzner, narrated by Kevin T. Collins, that I was reading a hard copy of Broken Harbor at generally the same time.  It really amplified for me the difference in the quality of writing.  Where everything about Broken Harbor had been fresh and bizarre, everything about A Case of Redemption, a legal thriller, was stereotyped so heavily I almost laughed in a few placed.  Even the title was so blatantly unoriginal (A Case of Need, A Case of Conscience, A Case of Exploding Mangoes, A Case of Identity, A Case of Curiosities) it really let me know right what I was getting into.  In a sort of “ripped from the headlines with a twist” manner, a black rapper is on trial for murdering a white pop star he was dating.  I listened to this as an audiobook, and when poor writing is read aloud it starts to sound like bad acting.  The dialogue is strained, the sex scenes could use some lessons from Fifty Shades as they were more awkward than the imaginings of a 15 year old boy, and even the twists near the end couldn’t save what I felt had been a waste of a story.  What it feels like to me happens with Mitzner’s stories is he doesn’t have any sort of original voice.  I hear a story which isn’t quite as full of striking characters as a Grisham or Connelly novel, which doesn’t have that unique page-turning property of a Harlan Coben book.  Nothing special here.

A Case of Redemption on Audible.com