Who was Piper Kerman’s girlfriend?

Since reviewing Piper Kerman’s memoir, I’ve gotten questions about this aspect of the memoir that inspired the Netflix hit series quite a bit. Just who was Piper Kerman’s girlfriend, that heroin-smuggling femme fatale? 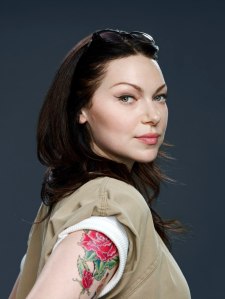 Laura Prepon as Alex Vause (via)

In the series, Kerman’s girlfriend Alex Vause is played by the saucy, sexy Laura Prepon. But even Prepon hasn’t met the inspiration for her character. She explained the mystery in an interview with Vulture.com:

You didn’t get to meet Alex before or during season one. Is she still MIA?
She is MIA, girl. I do not know where she is. And it’s kind of like … we don’t talk about the real Alex — I don’t know. I did want to meet her, but they were like, “That’s not possible.” So I don’t know where the hell she is.

Were you given any reason why it wasn’t possible?
I wasn’t, actually. Honestly, even though we’re based on the real people, the thing about our show is they really let us do our vision of these women. I know that I look nothing like the real Alex, whereas Taylor, you can see the resemblance between her and the real Piper. But also with Taylor, Jenji was like, “We’re doing your version of Piper. Don’t worry about trying to be Piper Kerman.”

I guess I’m asking less because I want to know how you used the real Alex as inspiration, and more because I feel this need to know where she is. We get the satisfaction of knowing where Piper is now, but not Alex.
I understand, totally. Trust me! But, yeah, that’s just not possible. [Laughs.]

Where do you imagine her today? In the scene where Alex and Piper are talking about whether or not you could have a future together, Alex says something like, “I’m good at moving large amounts of heroin.” Is that what she’s doing?
Honestly, whatever she’s doing, she’s definitely in a position of power. Because Alex is a power-hungry girl. She’s all about survival; she loves that whole [drug] world because she was in control of it. Wherever she can be, she wants to be in a position of power — and that’s also her relationship with Piper. We always talked [on set] about how I’m the spider and Piper’s the fly. Like when we were doing the strip scene and I was on the bed and she was dancing for me, we talked a lot about that scene and the director was like, “Listen, you do not go to her — she always comes to you.” But then Alex falls in love with this girl, and Piper really does a number on her, and Alex doesn’t know how to deal with it.

It is important to note that on this part of Kerman’s story, the series has already strayed from the book. Strayed extremely far! In the memoir, Kerman explains that she was kept in the same prison with her ex for only a brief time period after being transferred back to Chicago, as they were both needed to testify at a co-defendants trial.

So what is up with the “real” Alex?

In April, Vanity Fair journalist Sue Carswell tracked down the woman who features so pivotally in Kerman’s story, through newpaper articles about the case. Catherine Cleary Wolters, Kerman’s ex-girlfriend from her memoir, agreed to tell her story to Vanity Fair. Wolters is writing a memoir of her own, cleverly titled Out of Orange.

Although the show’s writers takes huge liberties with Kerman’s original memoir, jailing the two characters together for an extended period of time (which allows them ample opportunity for hook-ups, break-ups, and other such drama), Cleary Wolters also seems to recount the details of their actual love affair differently than they were explained by Kerman in her memoir. In the Vanity Fair piece, she says:

“When we were traveling together I started developing a crush on her. And eventually that turned into a crazy mad love affair,” Wolters says. “But that was after she had already done the deed that made her complicit.”

“We weren’t girlfriends,” Wolters adds for good measure. “We were friends with benefits . . . I was not the older sexy, glamorous lesbian who snatched her from her pristine Smith College cradle.”

For having her private life thrust into the spotlight, Cleary Wolters has flown amazingly under the radar and I can see her memoir being a huge blockbuster, rising up out of nowhere with what sounds to be a much more interesting personal story than Kerman herself.

Amazingly, Cleary Wolters also is an author with three unpublished novels, the Vanity Fair article said. I couldn’t find anymore information online about these books, but if there was ever a time people would be interested in reading them, it certainly seems like that time is now.

You can also read the full article by Sue Carswell, The Real Alex of Orange Is the New Black Speaks for the First Time: “I Was Not Piper’s First, and I Certainly Did Not Seduce Her,” on VanityFair.com.

Quick update! Thanks to my dear friend Kristen, who let me know this morning that HarperCollins put out a press release on Aug. 14th noting that they’ll publish Cleary Wolters’s memoir in May of 2015:

“Out of Orange is much more than the background for Orange is the New Black. The whole story is even more surprising and eye opening than we had imagined,” notes Mark Tauber, Publisher of HarperOne. “I predict it will be one of the top memoirs of next year.”

I agree, and can’t wait to read it!

The Real Alex Vause Speaks Out: Cleary Wolters Goes Humble In New Memoir ‘Out of Orange’ | kalireads.comJune 3, 2015 at 7:49 pm

[…] story, of how Cleary Wolters, AKA the real Alex Vause, found out about the show, is told in the prologue of her new memoir Out of Orange. I found it to […]